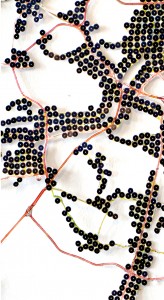 Penelope Cain is an interdisciplinary artist, working between drawing, photography and video.

Penelope Cain has a background in veterinary science and recently graduated with MFA from Sydney College of the Arts (2016). She has undertaken residencies at the Australia Council for the Arts studio in Rome, Asialink residency in Taipei and most recently, the Power Institute Award residency at the Cite International des Arts, Paris. She has exhibited in Sydney, Melbourne, London, Rome, Seoul and Taipei.

She was a 2017 resident at Parramatta Artist Studios. She lives and works between Sydney and London.

Landscape, in its widest terms, is central to my practice.

There is a nineteenth century German word that I am drawn to- Kulturelandschaft- a landscape created by human culture. A landscape bearing the manifest residues and remains of our cultural, physical and economic presence on the land. This is the territorialised, extracted, value-captured and transformed landscape of the Anthropocene.

In recent research I have been using 18th and 19th century landscape imagery as a pivot point to generate new propositional landscapes, to test and dissect thoughts around contemporary concerns with power and land. This investigation also engages with ideas around (Australian) colonialism, through a museum-gaze paradigm.