The Upsell series is a new line of enquiry, operating within my ongoing broad interest in the city, urban landscape and space/place, these works continue from recent works included in the Fishers Ghost Award  and the Hazelhurst Art on Paper Award. 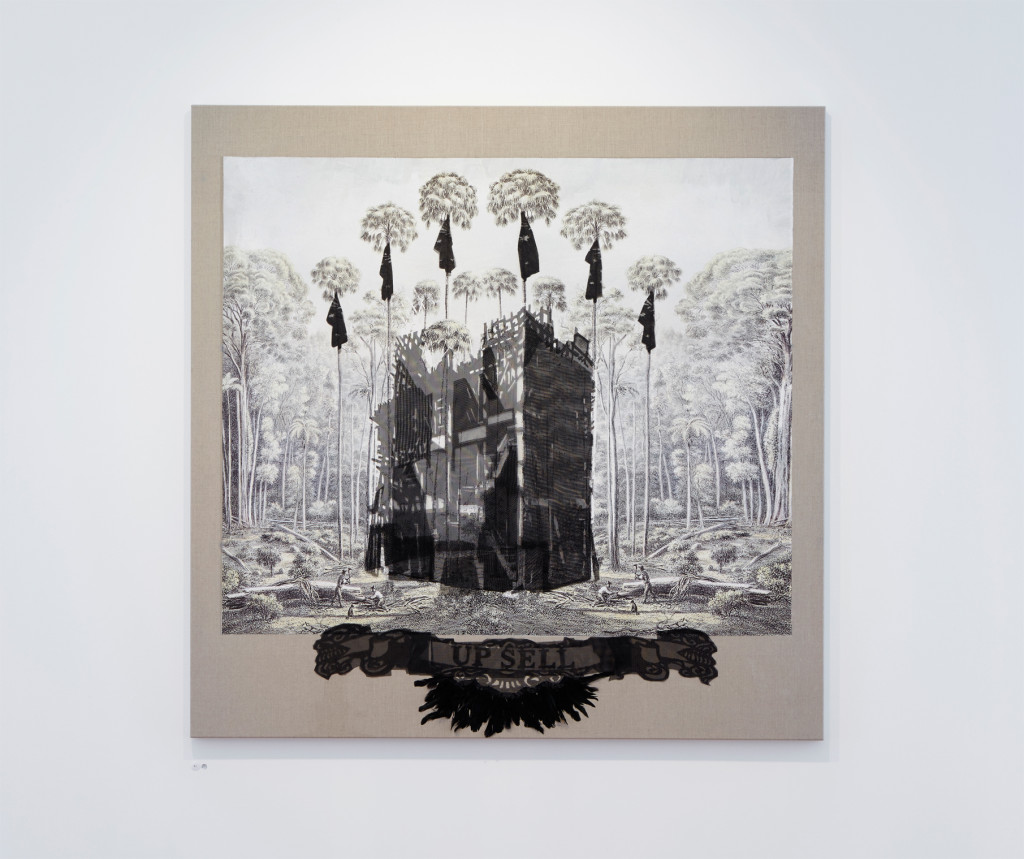 These works use as a starting point parts of a lithograph by 19th century Australian artist, Eugene Von Guerard, titled Cabbage tree forest, American Creek, New South Wales (1866 – 68). The image depicts the temperate Illawarra rainforest, just off the sandstone escarpment south of Sydney at Figtree, now a northern suburb of industrial Woolongong. Two woodcutters work in the foreground, dwarfed by the verdant, vine-strewn cabbage tree palms, figs and towering eucalypts. The panoramic view itself was made possible by the felling of a number of unseen trees in the foreground.

The lithograph is included in a book of panoramic landscapes;  ‘Eugene von Guerard’s Australian landscapes’. The book provided picturesque views for consumption by the middleclasses of Australia and England, but also offers historical insight into how the landscape was experienced and understood by the late-colonial white culture at the time. Von Guerard’s detailed yet romantic- sublime landscapes frequently feature a human figure, dwarfed by the trees, mountains and plains of the Australian landscape.

Three of these works have been curated into View at Artereal gallery, Jan, 2016. View is a show that loosely looks at contemporary takes on landscape, curated by Barbara Dowse, with catalogue essay: here. 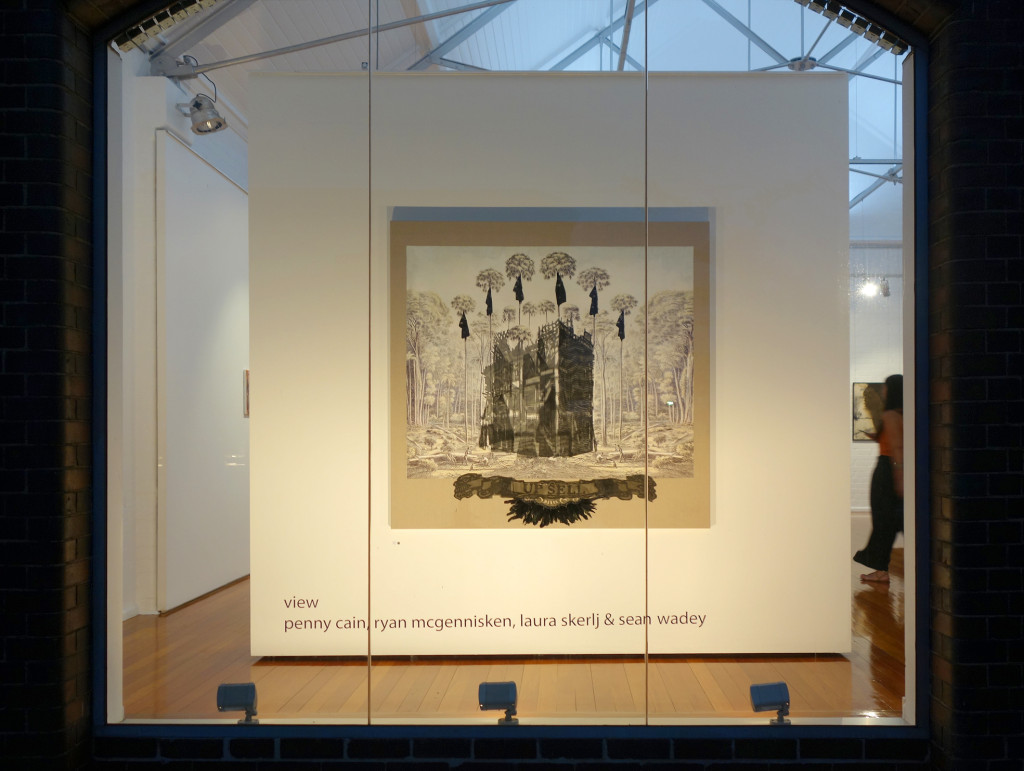 In using this work as a point of response, I wanted to develop further an ongoing enquiry loosely tying together thoughts around the contemporary urban landscape, the troubled Australian history of colonisation, land ownership, power and the economy, and how this could possibly be manifested in the city; the performance of the urban economy. 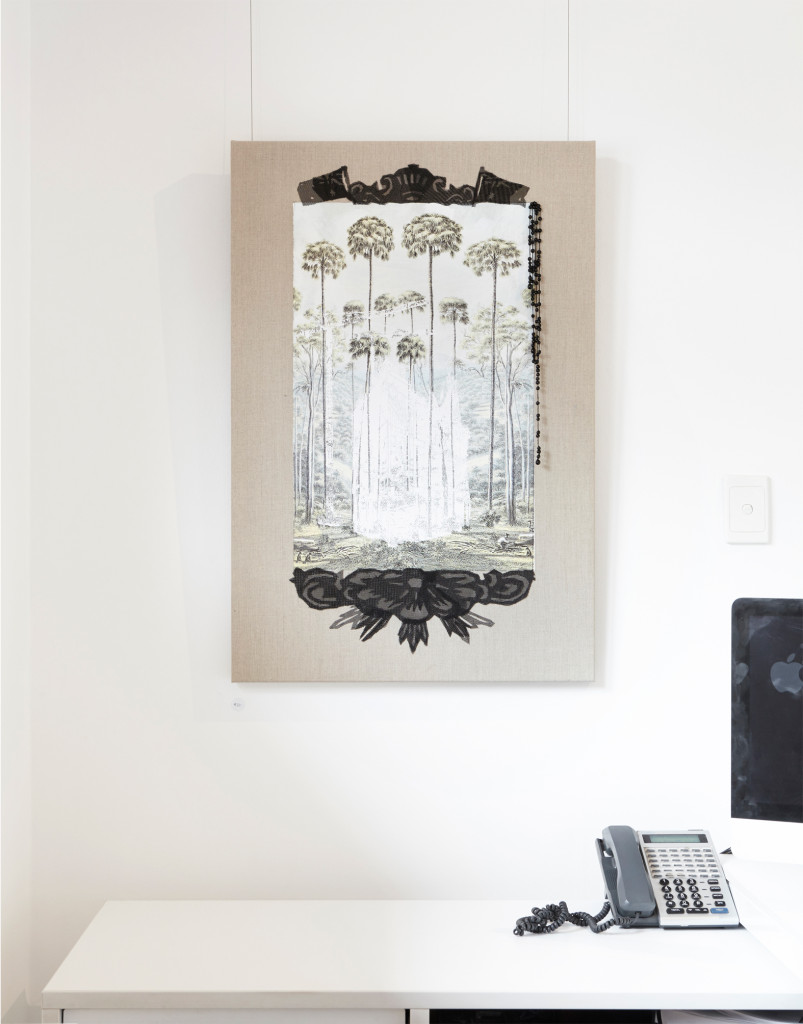 This wider line of research has been informed by the American artist, Robert Smithson’s ‘ruins in reverse’ and ‘zero panoramas’, from his Tour of the Monuments of Passaic, New Jersey, and an attempt to articulate the Euro-centric historic notions of the sublime with Smithson’s bleak urban pre-ruin. In addition I have a notion that the economy of the city may not be not the rational, transparent machine it presents, but that it could also be a propositional manifestation of white people’s Dark magic.

Power, Shamanism and Victorian mourning jewellery feed into the final works, where black fibreglass mesh and white cutaway shapes ghost the forms of multi-storey apartment blocks – like hauntings and manifestations from the future in the sublime, yet already ruptured, Australian bush.