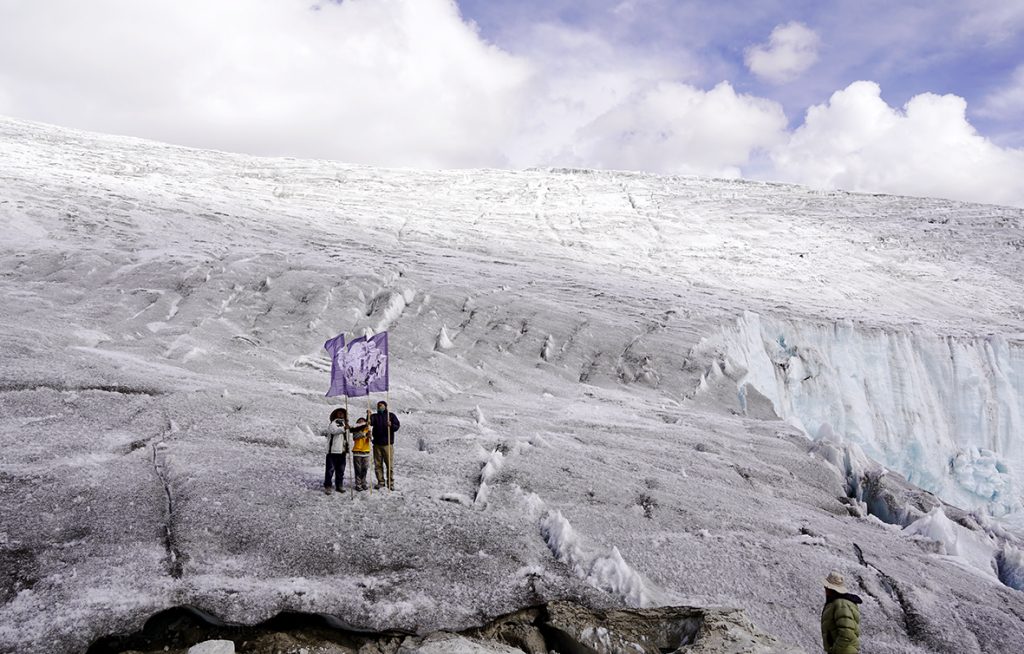 This project is in-progress, across June 2019-  Dec 2020: a multistranded interdisciplinary line of inquiry centering on the Quelccaya ice cap.

The Quelccaya Icecap in the Peruvian Andes is the largest tropical ice mass. It is a centre of climatology research and provides a highly sensitive window into the effects of climate change independent from the poles. Quelccaya breaths in slow time- expanding and contracting in response to air temperature since the 13th century. Since the 1980s it has been rapidly melting and is predicted to disappear within 50 years.

This project is about circulation, through a series of meanings.

Taking as a starting point a single Spanish silver dollar in a museum collection, the investigation biomaps the movement of lead from Spanish colonial silver mining activities in the Bolivian silver mine, Potosí, considering ideas around colonialism and anthropogenic landscapes through mapping at a molecular level.

Potosí was the largest silver mine in the Spanish empire, and Spanish silver dollars from Potosí silver were used as Australia’s first local currency (the holey dollar). For more about the history of the Holey Dollar click: HERE

The silver load at Potosí was in the form of silver- lead- zinc, a crystalised form known as Galena. As the ore load was extracted and crushed, lead dust with the unique isotopic fingerprint of lead from the silver/galena load at Potosí was carried in wind and snow to embed over centuries in the icecap of Quelccaya. As the years and centuries passed the snow compressed to ice and the bubbles of air and dust were contained within.

The ice from Quelccaya icecap can therefore be used to map the extractive economic activities of the Potosí mine across the rise and fall of the Spanish empire, through layers of chemical lead signals in a vertical icecores. 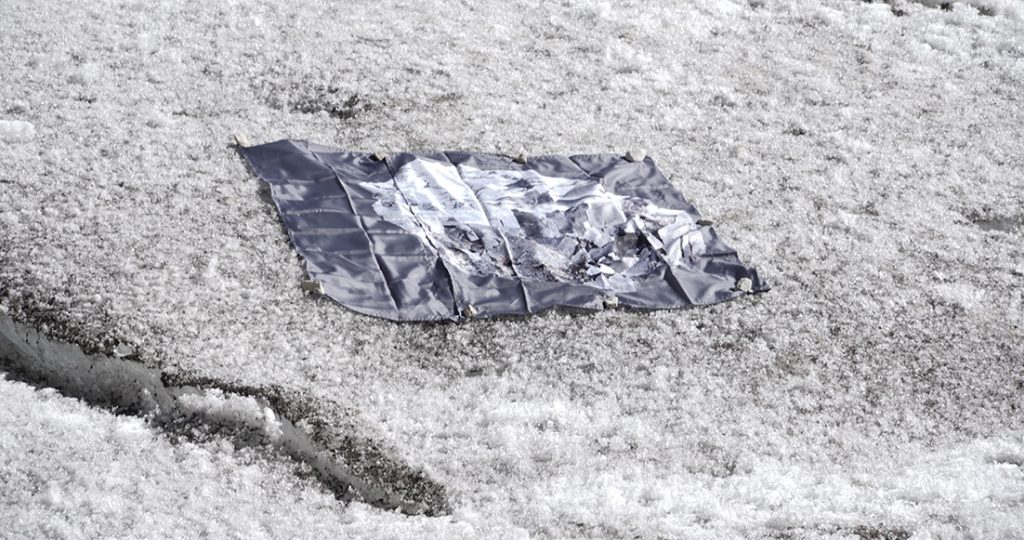 Flags bearing an image of an oversized galena crystal (lead/silver/zinc) representing the galena mined at Potosí, were raised over the Quelccaya ice cap by men from the region, in an act of recognition of the molecular level territorialisation.

These flags also act as standards to identify the emergent anthropogenic landscape- lead over ice, extraction over precipitation. 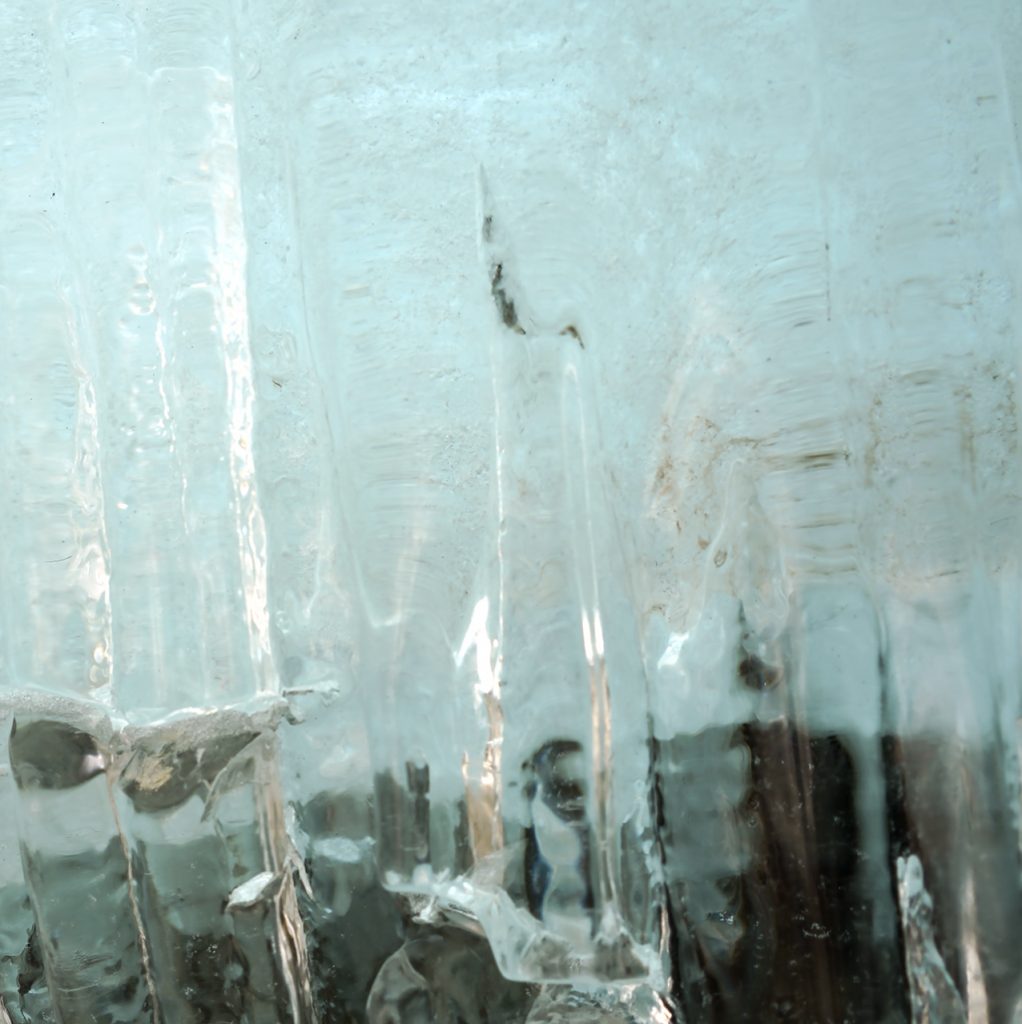 In 2021 these galena flags, along with water collected from the Quelccaya glacier, will be taken to Potosí to complete the line of enquiry.

This project started in response to a residency at Broken Hill (AUS) in 2018, where I biomapped lead dust from colonial British silver mining activities, as far away as  ice core samples from the Antarctic.

For more information about the circulations – of silver molecules, currency trade and anthropogenic change:   click here

Above right: ice stalactites forming under the melting leading edge of the ice cap

This line of inquiry maps the regression of the Quelccaya ice cap betwen 1798 and 1998. Scientific advice, data and assistance has been provided by Dr Christian Yarleque, National Institude for Research on Glaciers, Peru and Dr Douglas Hardy, University of Massachusetts.

1798 is a proxy for the beginning of the environmental effects of the Industrial Revolution, and 1998 is the year the Kyoto protocol was signed, a global, formal recognition of the effects of climate change. This 200 year window maps the effects of carbon-based  energy utilisation and economic thinking about land and resources, inscripted through the ice and rocks on the peak of this remote part of the world. 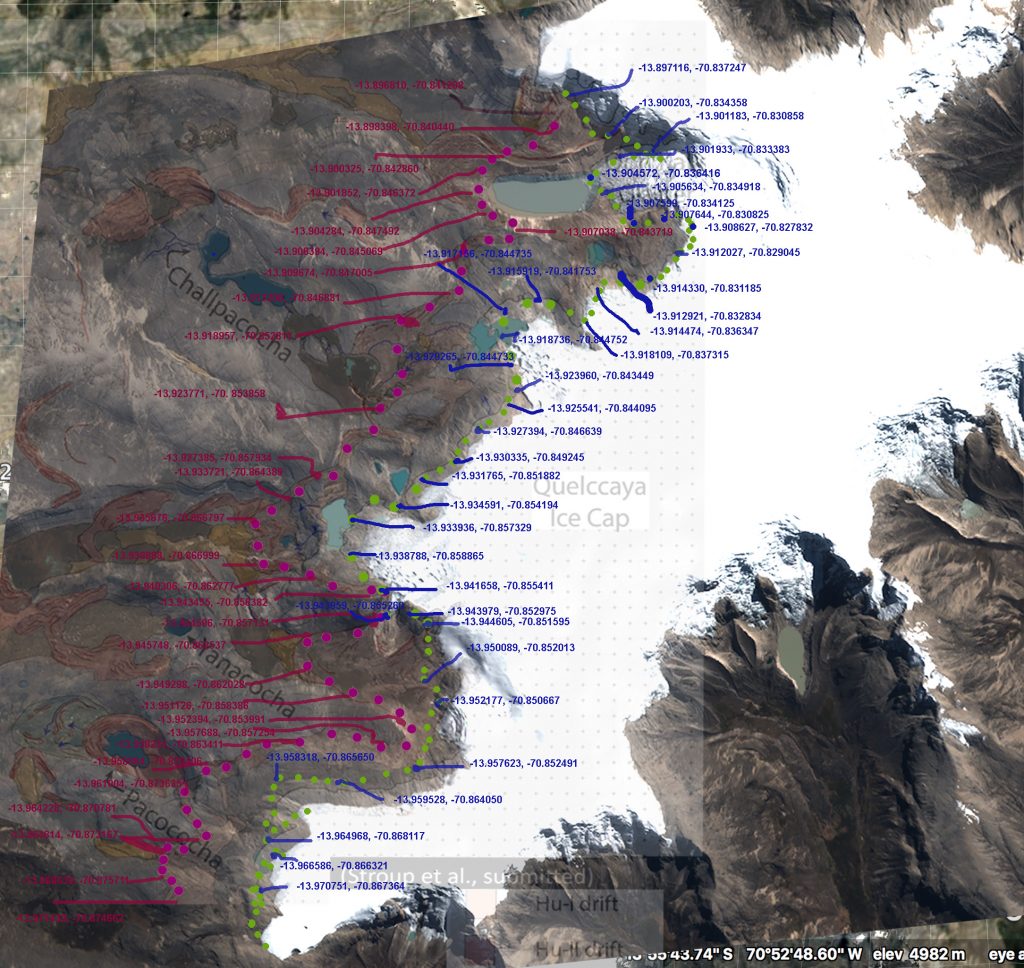 The red geo points trace the margins of the ice cap in 1798, using data from morane dating. 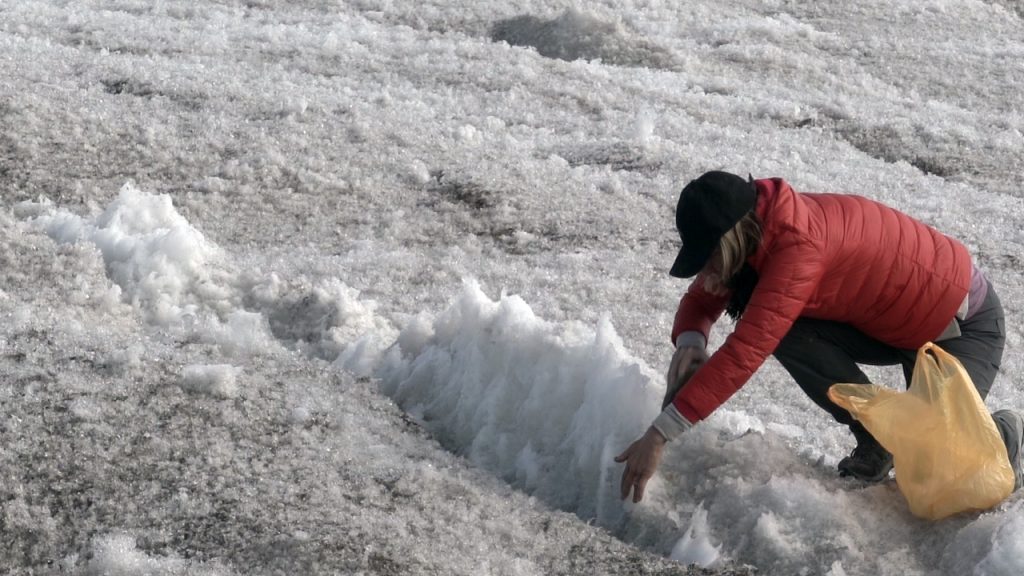 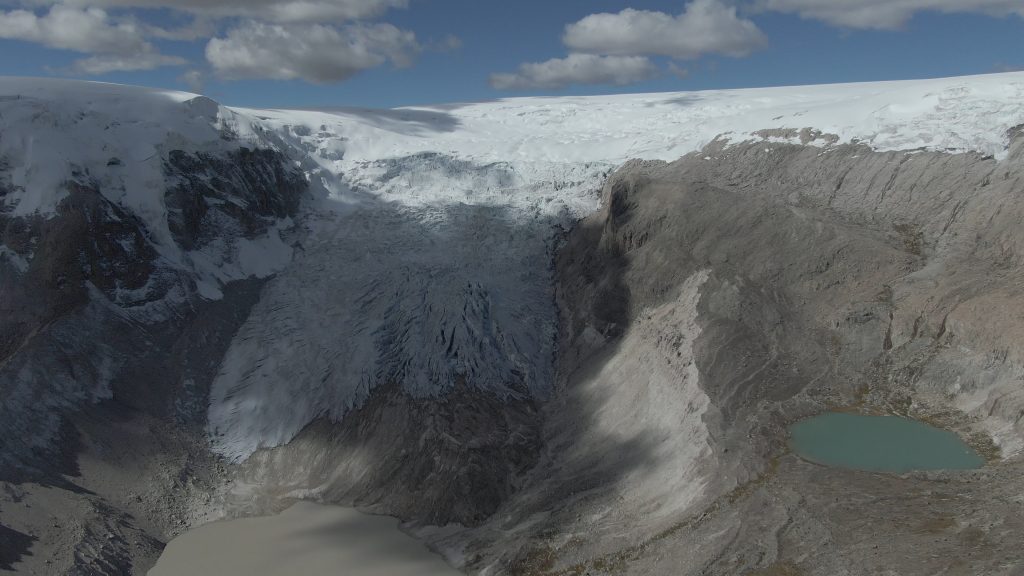 With thanks to the following scientists for their scientific advice, feedback and collaborative conversations:

NOTES:
Saturn is the Roman god of lead. Almost all terrestrial lead is a decay product from uranium and thorium, formed in supernova explosions. In Roman times, people with lead poisoning were called ‘saturnine’.

The term, ‘thinking like a mountain’ was coined by mid-century American ecologist, Aldo Leopold, to describe the interconnectivity of the environment and its ecosystems.

“Since then I have lived to see state after state extirpate its wolves. I have watched the face of many a newly wolfless mountain, and seen the south-facing slopes wrinkle with a maze of new deer trails. I have seen every edible bush and seedling browsed, first to anaemic desuetude, and then to death. I have seen every edible tree defoliated to the height of a saddlehorn … In the end the starved bones of the hoped-for deer herd, dead of its own too-much, bleach with the bones of the dead sage, or molder under the high-lined junipers … So also with cows. The cowman who cleans his range of wolves does not realize that he is taking over the wolf’s job of trimming the herd to fit the change. He has not learned to think like a mountain. Hence we have dustbowls, and rivers washing the future into the sea”